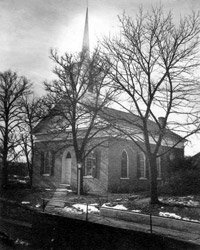 From one man he made all the nations, that they should inhabit the whole earth; and he marked out their appointed times in history and the boundaries of their lands. (Today's New International Version)

The year 1770 marks the formation of both Botetourt County and Botetourt (Anglican) Parish. An acre of land in Fincastle, the County seat was designated to be used by the Established Church of England for a church building and a cemetery. The building erected was on Back Street, the site of the present Presbyterian Church.

The next few years were stormy ones for the small Anglican congregation. With the American Revolution came a loss of support for the Established Church. The church building and its land in Fincastle gradually came under Presbyterian influence.

Although the congregation lost its building, services were continued in the homes of its members.  From about 1830, many of these services were conducted by visiting clergy at "Grove Hill," home of General James Breckinridge near Fincastle. The little group began to revive, and in 1837 the Vestry bought land on the west side of Roanoke Street in Fincastle for the sum of $175. (The original deed may be seen in the vestibule of St. Mark's.) 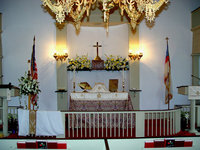 The brick building shows the Gothic influence in its pointed arches over the doorway and windows; however, the interior is traditionally colonial in style. There has been no basic change in the original structure. Various rearrangements of the pews have occured over the years, including at the time of central heating, and at the installment of the present baptismal font. Recently, several pews were repositioned to enlarge the choir area. The acorn hinges on the pew doors are the originals. The electrified lighting fixtures are probably also original to the building. The Georgian communion service dates from the early church and was preserved during the Civil War by the Breckinridge family.

Growth of the congregation over the years has led to the purchase of adjoining land and structures.  The Parish Hall addition to the church was completed in 1966. A major development in 2004 was the purchase of property at the corner of Roanoke and Herndon Streets. Existing structures there have been remodeled to accomodate Sunday School and meeting rooms, offices and reception areas, a Youth Center, and St. Mark's outreach programs. The Botetourt County Food Pantry is now housed in the addition and served by volunteers from the congregation and from other Fincastle churches.

St. Mark's welcomes daytime visitors, and at all services during the Church year.

Read an interesting paper below (click the link) about the church's silver, written by Ellen Brown.

The King - a brief account of our historic beginnings >

Our Campus and Brief History

The present building was erected in 1837. In 2004, we purchased two additional buildings across the street from the church and have renovated them for use in the Ministry Center, where the church offices are located along with the Carico Library, the Botetourt Food Pantry, and space for various other ministries.

The Youth Center offers classrooms and meeting spaces for children and teens, as well as a large multi-purpose gathering room. The building also includes a needlework guild room, historical displays, an office for the church historians, a kitchenette, and multiple rest rooms.

We are a congregation rich in traditions and faith, joyful in the knowledge that we are a living part of the present Body of Jesus Christ.  We love to welcome visitors of all ages!

We encourage you to browse our website and give us call.  We would love to take you to lunch, coffee or get to know you.